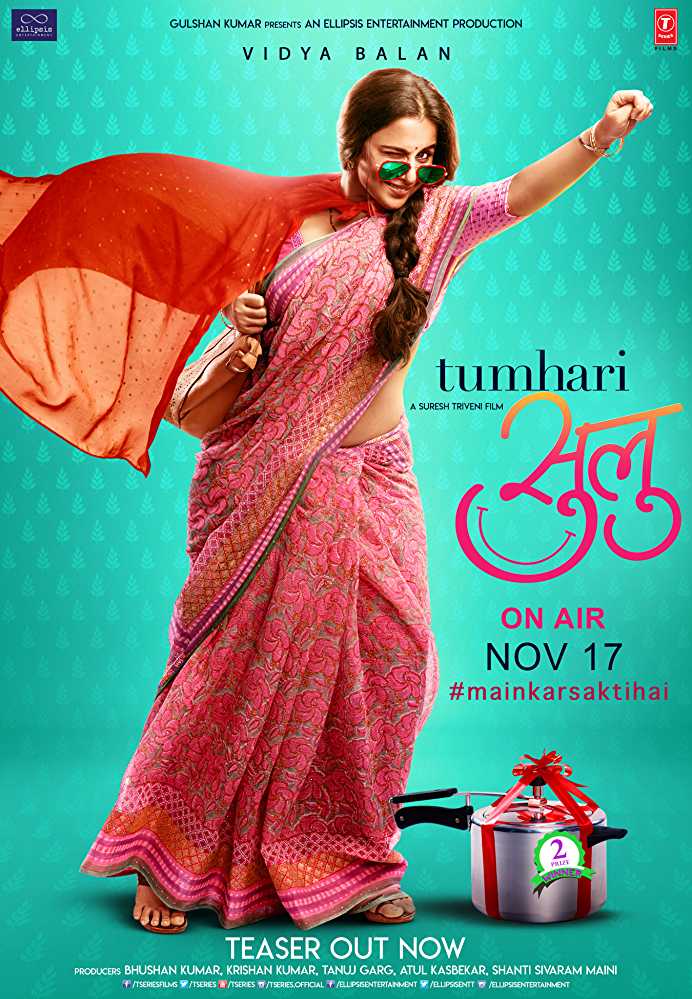 Tumhaari Sulu is one of the movies based on a middle-class family with one child.  The lead character in this movie are Sulochana (played by Vidya Balan), Ashok (played by Manav Kaul) and Maria (played Neha Dupia).  Movie starts by showing a close-knit middle family who are happy with their life.  They show the life of a middle-class house-wife lady doing following tasks – waking up the family in the morning, sending off husband & son to work & school respectively, listening to radio & doing some shopping for family and later welcoming kids & husband back home for dinner.  During weekend, she is visited by her Father and Twin Sisters.  Both the sister and father keep taunting Sulochana to take up some job.  They also reveal that she has failed 3 times in 12 citing various reasons.  But Sulochana has her own dreams and aspirations.  They show how she loves listening to Radio, participate in small contests and win prizes for family.  She also keep tracks of all her wining.

Sulochana ends up winning a Pressure Cooker contests on Radio and gets call from RJ Albeli from Radio Wow (played by Malishka – RJ Radio Mirchi 93.5FM).  She has sweet conversation with the RJ, sings song and at the end also blurts out that her family needs TV & not cooker.  The sequence is shown so nicely and is cute.  We all want what we don’t have, but hesitate.  But there are some folks, who don’t mind asking freely.

Though she is not given TV, she is invited to Radio Studio for collecting her prize as Pressure Cooker.  There she looks at a contest for becoming an RJ.  She uses her persistence power to setup up an audition with Maria.  Sulu says the dialog – ‘Main Kar Sakthi Hain’ before the auditions.  Though she does not complete the audition, she does leave a lasting impression with Maria, who shares her card with contact number.

Signing up as RJ

Maria remember Sulochana when they are desperately looking for an RJ with hunger to work.  Sulochana does decent in the audition and Maria decides to take a chance and give opportunity to a new comer without any RJ experience.

We all love to take up opportunities but hesitate. But when we show the spirits, there are people who watch out for us and give us opportunity.  Sulu’s family does not believe it until she visits the studio again with her family to sign up the contract.

Vidya Balan with her wonderful voice trains under and expert who works for same channel.  She learns quickly and is ready to host the night show in no time.  She utters the following works in the huskiest voice everytime at the start of the show.

The show is successful helping the Radio gets 200 callers and Sulu is an overnight celebrity.

Success can make even the closes relatives and friends jealous.  They advise us against taking up the new opportunity.  And during that time the only person who needs to guide one should be the ones own inner voice.

Solachana starts to face problem in prioritizing her family and does not realize the suffering go through.  There is a stage when something terribly goes wrong and she starts to feel complete responsibility.  From the verge of giving up, she bounces back with new idea to manage things. I was very impressed in the way every scene has been directed.  It is so much believable, and I felt that the story narrated is common with many house-holds.

The movie also depicts the strong will in a house-wife/lady – to take her family forward, make the family financially strong, be open to new idea, never give up attitude, keep up the self-respect in whatever is done and still be able to follow dreams.

The movie has got some wonderful songs and the music is also quite good.  Top pick among the songs is the ‘Tumhaari Sulu’, which is quite catchy and entertaining.  All the other songs in the movie are also very good and entertaining.

This is one of the best family movie that I have watched after “Kapoor & Sons”.  The acting by Vidya Balan as Solachana, is simply superb.  This is quite close to helping her get a National Award.  She is well supported by Manav Kaul who plays the husbands role with relative ease.  They both share very comfortable screen space.

This is a movie for sure will inspire all house-wives to try pursuing their dreams and do something for their families.  All of us in our family enjoyed watching the movies.  I hope we get many more such entertaining movies to watch in future.