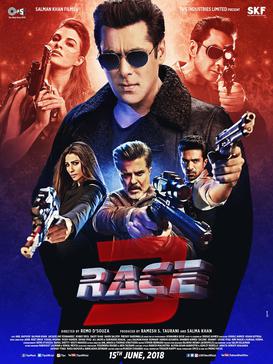 The movie revolves around the family of Shamsher Singh (Anil Kapoor) who owns private Al-Shifa island used for trading arms and narcotics.  His main rival in the operations is Rana Vijay (Freddy Daruwala).  The initial scene shows Shamsher visiting his base on a helicopter and dealing with a traitor in his facility.  Later we see Shamsher’s car being attacked by rival Rana Vijay’s gang.  Shamsher escapes and this brings up 4 new characters– Sikandhar Singh (Salman Khan), Sanjana (Daisy Shah), Suraj (Saqib Shaleem) and Yash (Bobby Deol).  All of them attack Rana Vijay’s hideout to teach a lesson.  Though they are unable to get Rana, we get to see some great action sequences and wonderful comradery between the characters. Highlight of the action sequence is the air-gliding by Sikhandhar from top of one building and landing at the action-location.  But like in the earlier Race-3 movies, one cannot expect when the next twist in the story would come.  To share a little info on the relationships, Sikandhar – Shamsher’s brothers son, Sanjana & Suraj – Shamsher’s twin kids, Yash – one of close family members.   Shamsher has complete trust in Sikandher for his abilities and work ethics.  And constantly Shamsher rewards Sikandhar more than his own twin children.  We then see the hurt mentality within the minds of twins and their possible desire to pull-down Sikhandhar.

Another main characters in the movie is Jessica (Jacqueline Fernandez), Sikhandar’s love interest.  Sikhandhar meets Jessica in Beijing and falls in love.  But their relationship ends abruptly when Sikhandhar comes to know that Jessica is just a small-time robber.  Sikhandhar only tells his family that Jessica has gone missing but does not reveal her identity or profession.

What follows next post this are plenty of twist and turns which lets audience thinking in different directions.  Few things that happen include – Jessica comes back as Yash’s girlfriend, Sanjana & Suraj finding out about Jessica & Sikhandhar past relationship, Twins getting closer to Yash, hatching a plot to bring down Sikhandhar.  It only after Sikhandhar is assumed to be captured & killed that many more mysterious facts are revealed.

One needs to watch until the last sequence to know the real culprit and motive behind the same.  But like in all the Race movies, there is loads of entertainment for the audience.

Among the songs, my favourite songs are “Heeriye” and “Selfish”.

This was one of the movies I was waiting to see from long time.  Though I could not go for the first show, I went for the 2nd show and for sure it did not disappoint me one bit.  The actions sequences, picturization and songs in the movie are simply awesome.  Many of the action stunts were cheered by people and it was fun.  Though I have heard a lot of negative comments from people, it truly surprises me.  The only area where I thought they could have improved is the screen.  Otherwise, this movie is an out and out entertainer.  They also reveal that next part of Race might come soon which might again star Salman Khan.