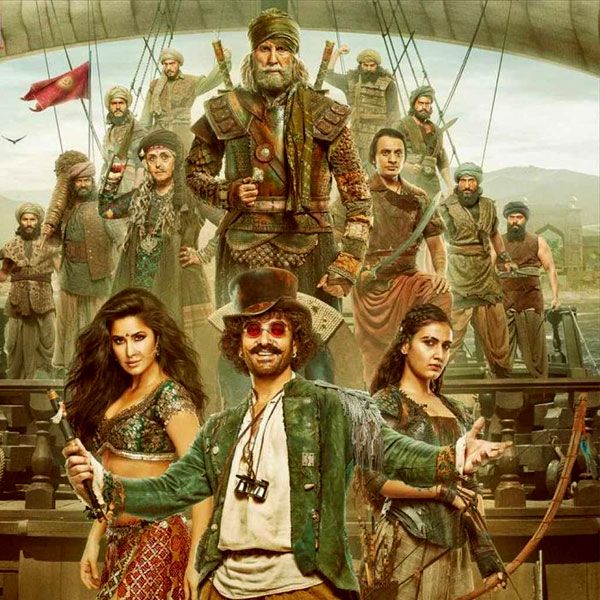 This sure is the best way to celebrate Diwali, a blockbuster in making. Imagine watching two superstars sharing the screen space.

The movie starts on a revenge note with British ruler Clive taking over a kingdom.  Amitabh Bacchan playing the role as Khuda Baksh acts as a saviour of Kings daughter. He comes right at the time when she is about to be shot by British Officer Clive.  He has his gang of warriors who called themselves as Azad Gang. They are more like pirates who want to vanquish tell tyranny and sail on pirate ships to reach their hide out.

Aamir Khan playing the role as Firangi Malla is simple awesome. Every scene that he is there is fun and intense. His role in the mole is that of master-deceiver.  The character changes personality to suite the situation.

There are plenty of scenes where AB and AK are seen walking/fighting/farming side by side.  Both look simply awesome and seem to try performing one better than other.

Fatima Sana, who shot to fame after playing role as Gita Phogat in Dhangal has acted pretty good.  She plays the role of the Kings’ daughter named Zafira.

Katrina Kaif looks beautiful and sexy like always. But yes, it’s a little disappointing see that she has been little part to play.  The only highlight about her performance are the two songs and few dialogues.

Cinematography and Picturization are pretty good. Few of the dialogues are also good. But action sequences could have been better.

Also, something very obviously missing in the movie is the pace.  There are multiple scenes that could have been avoided.  This would have in-turn allowed the overall movie time to be reduced and eventually kept the audience engaged.

Editing team should have done a much better job in identify the most relevant and taking off the irrelevant scenes.

There seem to have been a desire to keep AB and AK in many scenes which could have been avoided.

The movie becomes so much predictable despite multiple twists and turns.  This does not make it thriller movie.

Music and background scores are good at time but in general poor.

A commercial grade action movie with top leading Hindi Actors that had a lot expect.  It was a bit of disappointment in the end as the story-line and action-sequences did not wow.  The music and background score were not up to the mark.  Most importantly the actors with such good caliber were under-utilized.

Among the good things about the movies are few dialogues, Suraiya song and some action sequences.  It’s an average movie and surely not a block-buster quality. Next time someone makes a historic movie in Bollywood, audience will think twice before going to theatres.