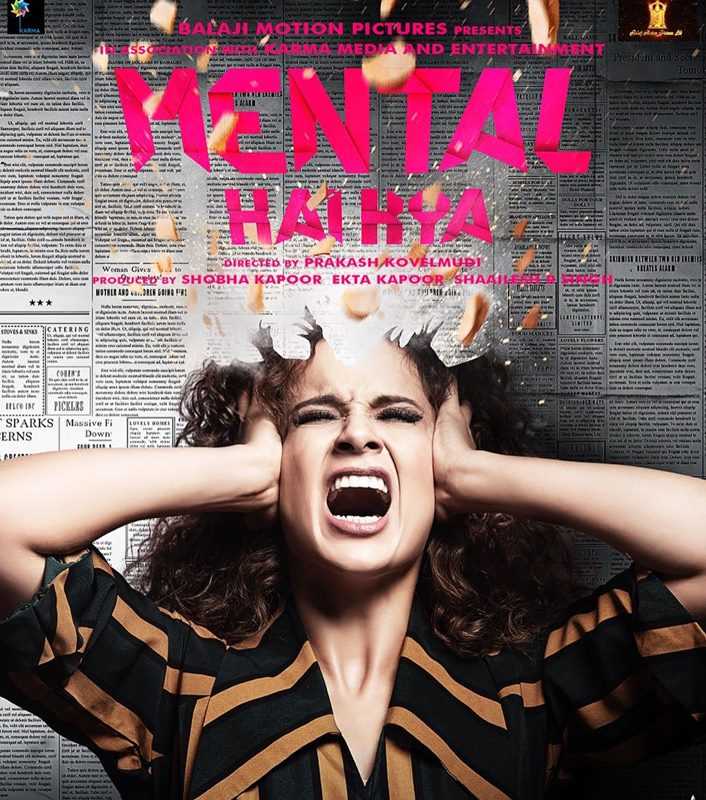 The movie stars some of the most talented actress and actor in the industry, Kangana Ranaut & Rajkummar Rao.  These actors have taken up some challenging roles in their past movies and excelled.  We as audience have enjoyed their performance and acting skills.  Its good to see them come together in a movie that’s Thriller, Crime & Suspense.

Movie starts off with a scene of a girl watching her parents quarrelling and mother being hit by father.  The girl’s Bobby (played by Kangana Ranaut) is seen to be mentally disturbed and she unfortunately loses her parents.  But then they show multiple unfortunately incidents happen in Bobbys life.  She grows up to be a dubbing voice artist and has a boyfriend who helps her get job opportunities.  We get to see Bobby as someone who is very different and has no friends.  They show a crazy side of Bobby as she poses heroine of the movie, she does voice-dubbing, and frames the picture at home.

The movie becomes more intense when a new couple move in as tenant to her adjacent house.  She watches Keshav (role played by Rajkummar Rao) with admiration and then starts to suspect him.  There are many things that Keshav does that makes Bobby grow in suspicion about his character.

After few days, they show Keshav’s burnt alive under mysterious circumstances.  This is when the movie changes dramatically.  We get to see more dark sides of Bobby, her mental issues and suspicious natures.  What we get to see after that is just amazing and suspense keeps building after every scene.  As the movie progresses, we can see some scenes that are tense and unexpected thing happens.  The director of the movie has done an amazing job and the script is quite interesting.  I must appreciate the creativity of the script write to showcase various aspect in a single scene.

The movie has many funny sequences that will make anyone laugh.  Few supporting actors in the movie also have done a nice job, like Jimmy Shergill, Satish Kaushik.

Entire movie rests completely on shoulders of Kangana & Rajkummar.  It’s a good movie to watch but will recommend watching it only if you love a thriller.

The movie can get a little slow at times and one will wonder why couple of scenes have been added.  A bit more editing would have surely helped.

We all know that Rajkummar does amazing acting but what we don’t get to see is the transition of his expressions in a single scene.  We to see only one-dimensional performance from Rajkummar until the last few scenes.  I expected a lot more performance from his side.

It would have been nice to leverage the acting skills of Jimmy Shergill, who just is wasted doing very few scenes.

Its good to see Bollywood attempting to makes a thriller movie on someone with mental disorder.  The story is also unique as it shows the mindset of a criminal, suspect and mentally ill patient.  After all the controversies surrounding the movie title, conflict between Kangana & media, glad to see a good movie from Kangana.  It will silence critics and bring Kangana on top of the most wanted actress for movie.  Its nice to see Rajkummar slowly transitioning into an actor who can be part of commercial movies. It’s a must watch movie for any Kangana fan.